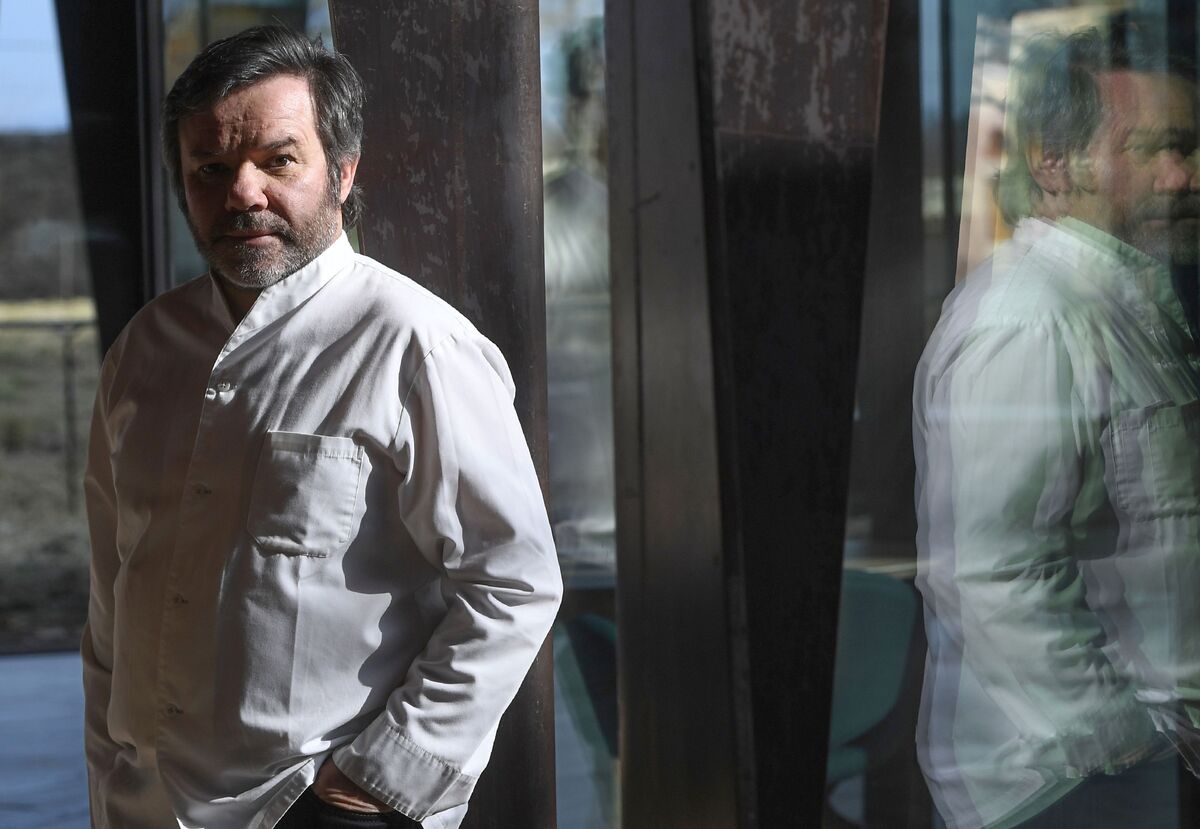 If you have any difficulty imagining the levels of pressure, which come along with this burden of expectation you only need ask

Sébastien Bras what it has been like for him following in his father’s footsteps at the three Michelin star Le Suquet in Laguiole. Bras  is no lightweight, he has kept his restaurant’s three Michelin stars for a decade.  And yet the pressure of expectation weighed so heavily on this chef’s shoulders, so much so that he has asked to be relieved of his three stars by Michelin.

Not so Michel Troisgros a chef who wears the burden of being the third generation heir to a culinary dynasty with an indifference so dismissive it makes Marcus Aurelius look like a worrier.

A chef on a culinary royal tour

Then again any chef whose culinary apprenticeship, and backstory, takes in spells at Alain Chapel in Mionnay, Frédy Girardet in Crissier, Taillevent in Paris, Michel Guérard in Eugénie-les-Bains, Comme chez Soi in Brussels, Chez Panisse in Berkeley and The Connaught (hotel) in London, is probably is not going to be found wanting in the self-confidence department.

In any event this combination of attitude and experience has been paying off for chef Troisgros since he took sole charge of the family business in 1996.  While sitting back and relying on the old classics might have proved a temptation, to a lesser chef, Michel instead took an axe to the old menu, purging it even of modern classics like such as the signature Salmon Escalope With Sorrel.

It’s always a pleasure to see bravery rewarded and in the case of Michel Troisgros it has been rewarded again this week, as he finds himself siting at the pinnacle of the international chef top 100 ranking.

Troisgros beat out Yannick Alleno of Alleno Paris at the Pavillon Ledoyen and Joan Roca of El Celler de Can Roca in the 2018 ranking, based on a survey of the 582 chefs across the world who hold two or three stars in the Michelin Guide.

The chefs were asked to name, anonymously, five of their international colleagues who they feel best hold high the values of the profession, create great cooking and whose restaurants are must-visit places. Troisgros succeeds French chef Alain Passard, who made the top of the 2017 ranking.

The ranking included 41 French chefs in the top 100, up from 31 in the 2015 ranking, “which proves the dynamism of French cooking,” according to a statement from Le Chef.

You've Come To The Right Catering Recruitment Agency! Finding the right chef's job demands the same care and attention you bring to the kitchen every day. We recognize that chefs warrant specialist recruitment attention when it comes to negotiating their future job moves. That's why our business is staffed by recruitment specialists with backgrounds in both catering and executive placement. … END_OF_DOCUMENT_TOKEN_TO_BE_REPLACED

You manage a catering business & you need to find chefs Our focus is on finding chefs. We don't have any other focus, just chefs. You can't know everybody - if you did, finding the right chef would be easy. We find chefs, we know where the best chefs work and we know how to approach them. We know which chefs are capable of which jobs and we know at what stage they're at … END_OF_DOCUMENT_TOKEN_TO_BE_REPLACED

You've Come To The Right Catering Recruitment Agency! Finding the right chef's job demands the same care and attention you bring to the kitchen every day. We recognize that chefs warrant specialist recruitment attention when it comes to negotiating their future job moves. That's why our business is staffed by recruitment specialists with backgrounds in both catering … END_OF_DOCUMENT_TOKEN_TO_BE_REPLACED

You're here because you want to recruit the best culinary talent and have heard we're the people who can get them. Or perhaps you're a chef eager to begin planning for that new job. Whatever your reason, you've come to the right place for chefs. At TOPCHEFS you're in the hands of recruitment professionals long trusted to handle the most exacting recruiting situations. … END_OF_DOCUMENT_TOKEN_TO_BE_REPLACED